The weather this week was a little hard on our customers . The week started with a very nice day on saturday and then changed for the worst with a lot of wind , rain and cold . We even saw some snow flakes at one point in the week . So after we got used to that , the weather  changed for something even better which was cold, rain and even harder wind from the north . In other words the weather was very bad this week . Our bear hunters , of which many were on their first time with us, had it very hard . We’ve had our worst result ever in the last 20 years , with a 72% killing ratio. Those results do not include our 7 wounded bears and our 3 other clear miss. We had a lot of other bears seen that were past on but even with all of this we did not do as good as usual .  Natuaraly if we did what most of the other lodge do and counted  those bears we would be a lot higher on our killing ratio . All together we did good for everybodys standard but not so good for TBL standard  . We did have to push our hunters a lot harder than usual to get those results but at the end I guess it was good . With the weather we had we could not do as good as usual and it was not as pleasant for our hunters that had to work in the worst of weather ever.

But our other customers that were fishing did very very good, at least most of them did very good . First we had guys that were on a 4 days trip , fishing for pike only  that did realy good and said that they love TBL . Another group that were first time customers and are satisfied . They have done well on the remote lakes and the high point of their stay was a 42 inches pike caught and released in lake Kipawa . One of our other group that did very good is the Koller party , they caught many walleyes and at least one huge pike that we know of. It is funny to see that some guys come here for pike fishing and can’t catch them while others fishing for other species catch a lot . I think it as to do with some of the fishermen thinking they know more about pike fishing then the pike themselves . So far as the rest of the camp they did ok or good depending on who we talked to. In general we did very good at Walleye, good at Pike and our customers that did try lake trout told us that they did good. Friday was the nicest day we had this week and it is sad for our customers that are all leaving tomorrow. Next week weather is suppose to be good so hunting and fishing should be even better.

*Update:   We’ve had our first nice day of the week on friday, good weather and such. A couple of guys came to show us the pictures on thursday night so the rest of the camp brought theirs in on friday morning to make sure they would also get on the biggest fish of 2016 board. A very good week for fishing in the end. 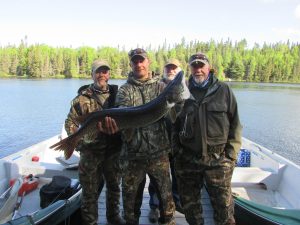 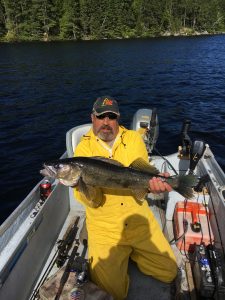 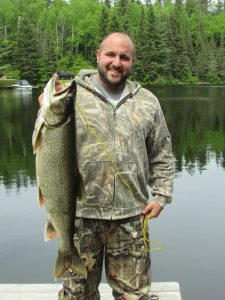 Dont forget about our new cast and blast package. We already have many party reserved for what promise to be a great and fun package .