This past week at TBL we had some good fishing and some bad fishing. Hunting wise we did very good as usual. Many very nice walleyes are being caught this year again which makes us think that the years to come are going to be fantastic. A lot of our customers are reporting catching walleyes over the slot and a lot of them from 25 to 29 inches. Most of those being females we know the lake is going to get even better than it has been in the last years. Now everybody is used to catch and release these great fish which are the future of our lake. Many of the people that were not sure about the slot are now convinced that is the best thing that ever happened to this lake. Bigger females in the lake and more fun every year. The slot is the best for a lake like lake Kipawa that has fish that grow very fast. The slot is also very good because Québec regulations did not make the mistake many other regions did by letting the fisherman keep one over the slot, which makes a big difference. It is no good because it opens the door to people that don’t like to follow rules and because by keeping the bigger ones you actually kill the best spawners of your lake. A couple more years of these regulations and even Kim will be able to catch walleyes in this lake. Janet and Bill did good again with Janet catching more and bigger walleyes then Bill and that’s all that’s important, isn’t it Janet?! Our regular customers Pete and Wendy also did great again this week on their 30th year with us at Taggart Bay. 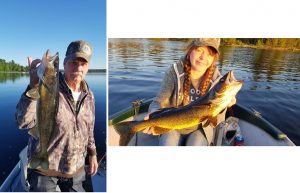 We also had some good party for hunting last week with the Raber party, the Stoneback party, the Yoder and Miller party. Everybody did very good but Lance which did not get to see a big bear, even if he saw multiple bears through the week. Lance has been hunting bear before and is very good at it, we could tell easily with the number of bears he’s seen on the week, he was just not lucky enough to see a very big one. See you and your son’s next year Lance. Again, a very good week with a lot of bears killed some missed and many passed on. Only a few hunters to go for this year and we will be done for 2019 bear season. I know I have been saying this many time in my weekly update, but it is even more true now. We book a lot more trips every year and we book them earlier every year, so please make sure to reserve your trip early to avoid disappointment. We want you here every year and most of our hunts and fishing trip are sold very fast.